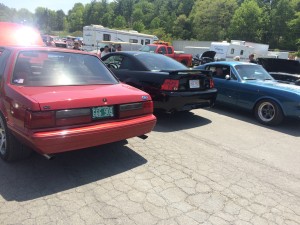 For anybody “coming of age” in the late 1980’s-early 1990’s, there were a few things you could be certain of, as follows: if you wanted to ask a girl out, you had to get her number and call her; CDs made jumping from song-to-song easier than on cassettes, but you still had to buy a whole album just to get the one single you liked; and if you were into cars, and most especially into street racing, you could bet on getting spanked by either a 5.7 L IROC Camaro or a 5.0 L Fox Mustang at some point. Third Gen Camaros and Fox body Mustangs were the two kings of high school parking lots everywhere, doing burnouts to a soundtrack of Gn’R, Metallica, Soundgarden, and Nirvana.

Third Generation, or “Gen” Camaros were made from 1982 to 1992 in various configurations, with the 5.7 L IROC being the most feared, and the 1LE race-ready option the rarest and most highly coveted.

Fox-bodied, aka five-oh or five-point-oh Mustangs derived from the lightweight Fox Platform, the longest-running vehicle architecture ever introduced by Ford Motor Company. From 1979 to 1993, these boxy little cars came in two different configurations across three different body styles, peaking with the limited-run SVT Cobra in 1993. With their revolutionary fuel-injection, beefy five-speed transmissions, and ease of modification backed by a plethora of affordable aftermarket parts, they took the car world by storm.

Fast forward to 2020, and the world of car-collecting, and these cars are just now coming into their own. As most are reaching the 25-30 year mark – and most of the guys who maybe wanted one and could never afford it, or had one and sold it are now in or approaching their 40’s –  their value is increasing every year. This is especially true of the “survivor” cars, or those that survived nearly three decades of abuse intact.

All of the muscle car guys in their 50’s and 60’s are slow to catch on to the Third Gen/Fox body phenomenon. Car collecting is a generational thing, and it’s up to us, the guys who grew up with these cars, to push them into the limelight and get them the recognition they truly deserve at car shows, auctions, etc.

The survivor Third Gens and Fox bodies are definitely out there, but they’re getting much harder to locate, as most were modified and beat to death on the drag strips and boulevards of America.

Here at Nineties Muscle, we’re always on the hunt, prowling the auctions, car shows, barns, and random garages throughout the Northeast and Florida…so you don’t have to.